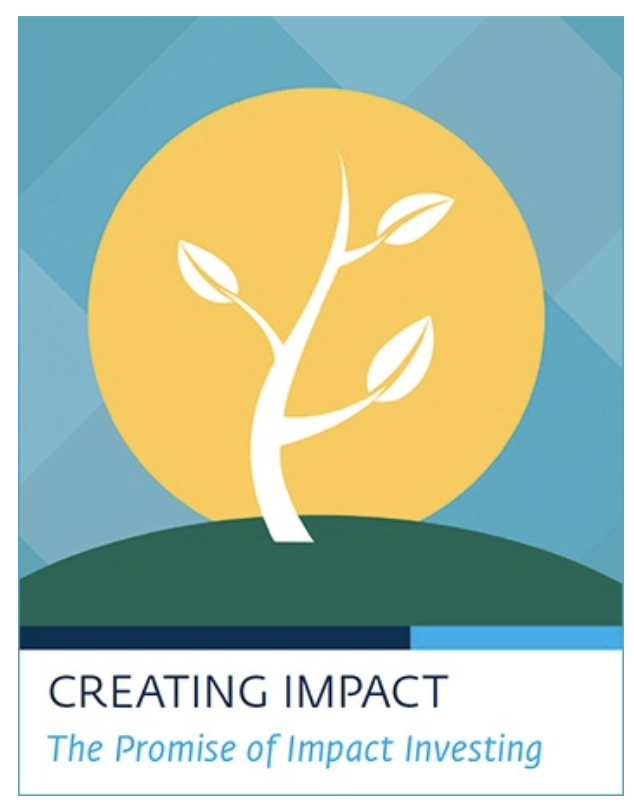 Posted at 10:30h in Insights by Mara James
Share

Last week, the IFC and the Brookings Institute co-hosted “Impact investing: Achieving financial returns while doing good,” a discussion that explored the challenges and potential for impact investing to scale and served as the official rollout of the IFC report, “Creating Impact: The Promise of Impact Investing”. IFC CEO Philippe Le Houérou introduced the report, which is a thorough assessment of the potential market for global impact investing. Le Houérou’s introductory remarks were followed by a summary of the major conclusions of institution’s report from the IFC’s Chief Thought Leadership Officer Neil Gregory. A panel moderated by Brookings Interim Vice President and Director of the Global Economy and Development Homi Kharas then followed, which included Jennifer Pryce, President and CEO of Calvert Impact Capital, Alifia Doriwala, Managing Director at Rock Creek Capital, Sonah Shah, Professor at Georgetown University and Executive Director at the Beeck Center for Social impact and Innovation, and Jane Nelson, founding director of the Corporate Responsibility Initiative at the Kennedy School of Government and a Brookings fellow. The following is a summary of the panel and its key takeaways.

One of the conclusions from the IFC report is that the size of the market is difficult to assess given the various definitions of impact investing that abound, and the many types of opportunities in the market. What can be concluded with certainty is that the size of the market is much smaller than its potential. Part of that is a result of the fact that most of these investments are currently in private markets, whereas most investors’ appetites are in the public markets given investor preference for liquidity. In short, that the appetite from investors far surpass the opportunities that are currently available in the market.

The panelists and the IFC report did agree that impact investing is indeed scaling, particularly given the generational shift in wealth—estimated at approximately $30 trillion—from the Baby Boomers to the millennials and Gen Xers who place a higher priority on responsible investments that create social or environmental impact. While there is still skepticism among investors, as Sonal Shah explained, there is also demand, and she reported seeing more firms—from BlackRock to JP Morgan—feeling they no longer have the license to operate without being more responsible about their investment.

Jennifer Pryce explained that Calvert views the market as two pools of capital. The first pool is the capital behind the large banks which face extremely high regulatory and offering requirements which makes it harder to access. She estimated this market at approximately $360 trillion. The second pool of capital, which is much smaller, is that of the family foundations and other private vehicles. This pool of capital highly discretionary and should be easier to bring into the impact investing space but these investors will likely need to be targeted one by one.

Pryce believed that more evidence is needed to demonstrate the case for impact investing in order to crack these pools of capital. This was a key finding of the IFC report, that more data is needed to prove that investors need not sacrifice returns for impact and that these types of investments aren’t necessarily inherently riskier than traditional investments. Pryce believes that Calvert’s extensive track record can serve to access this first pool of capital, stating “now we have standards to pierce that top bucket with integrity” and that “risk premiums are much higher” without that type of record. More examples of the successes of impact investing will in turn facilitate more financial advisors that can attest to these strategies. More platforms are needed for advisors to point to and offer in order to scale impact investing. Alifia Doriwala from Rock Creek Capital echoed Pryce’s comments by explaining that risks can actually be mitigated by taking impact investing into account. The overall risk profile of a portfolio can be mitigated by looking at it five and ten years out, which is a key aspect being overlooked by the market at the moment.

Rock Creek Capital’s Alifia Doriwala touched on another conclusion from the IFC report, which is that regulators need to widen the scope of fiduciary duties to consider non-financial objectives. In order to truly scale impact and bring larger institutional investors into the fold, regulators need to rework their definition of these fiduciary duties. Jane Nelson explained that the potential for these investors is enormous should they begin to integrate impact measurement to optimize the positives and mitigate the negatives of their investments, but that this isn’t likely to occur unless corporations and investors are required to disclose their non-financial impact. Nelson argued that regulation requiring this type of reporting would be incredibly helpful to scale the industry.

Doriwala did interestingly warn that while a top-down effort by regulators would be helpful to the industry, there is also a need for a simultaneous push from the bottom-up with the constituencies of investors lobbying for impact investments. She warned that a solely top-down approach can lead to whitewashing and not true impact.

Finally, the panelists all agreed with the IFC conclusion that two key characteristics are required for impact investing. The first is intentionality, which is imperative for investments to be considered impact investing. Sonah Shah made the point that investors should focus on the future. Going backward to collect impact investing data doesn’t really count given that the intentionality of impact was not necessarily there. Second, Shah noted that intentionality needs to be paired with a solid framework for measuring impact investing to bring some consensus and discipline to integrate impact with financial considerations. Nelson described this challenge as working to ensure that as many different business models and asset classes have impact principals that have rigorous measurement and accountability as possible. Only with credible metrics, similar to those we currently use to measure financial returns, will we be able to create what the IFC describes as “a wave of finance for good”.

Just this past weekend it was announced that sixty investors, who manage more than $350 billion in assets collectively, have signed onto a new set of nine principles created by the IFC to provide greater transparency, credibility and discipline to impact investing. The wave of finance for good might be closer than we thought.